What sort of gate latches do I need?

The type of latch you you need depends on the type of gate that you are buying. See our guide below to the more popular choices. 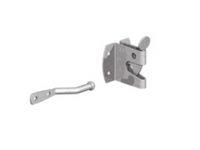 Auto gate latches are typically for gates that swing inwards. They  are double sided i.e. they can open and close from either side of the gate. The street side of the gate typically is a plate with a thumb depressor. When pushed the latch-arm on the inside lifts, allowing the gate to open. A well fitted latch arm will fall into the catch on its own.

Generally used for field gates or farm gates. Self locking. Can only be used when gate is hung behind posts. Can be locked with a padlock if required. The self locking auto gate catch automatically secures the gate closed once pulled shut.

Generally used for field gates or farm gates. The self locking auto gate catch automatically secures the gate closed once pulled shut. Can only be used when gate is hung behind posts. Can be locked with a padlock if required.

Spring Catch & Keep Set. For use with single gates hung on back of posts. Not suitable for use with a pair of gates. These are often used on Bridleways where a rider can open gates without dismounting from a horse.

Generally for use with 5 Bar gates to latch a pair of gates together. Should be used in conjunction with drop bolts. Caring for your Wooden Gates in Winter Gallery

Caring for your Wooden Gates in Winter